I planned on stopping for thirty minutes in Birmingham, AL to grab a bite to eat as my Alabama state stop. I found myself in Five Points, a part of town with an eclectic mix of restaurants and residences.

At Jim's invitation, I chose a sign from the pile on the ground and joined them. It's the natural thing to do, right?

There were lots of options, all peace and love related (two of my favorite things!), and I picked "Love our Mother" in honor of my daughter, Riley, who is an animal and earth advocate. (Maybe a subliminal message about me too - lol!)

I was no longer a vigil virgin! As we properly introduced ourselves, I discovered that a loosely organized group of activists have been holding vigil at Five Points every Wednesday, 7:30 to 8:30 am, and Saturday, 5:00 to 6:00 pm, since 9/11, rain or shine. I had come upon Jim and Shelley right at 5:00, and other activists trickled in over the hour, including Hope, Ryan, and their sons Amos and Nuri.

Slowly, because Jim and Shelley don't focus much on themselves, I also discovered that Shelley lived abroad much of her childhood as the daughter of a CIA family (and we both lived in Switzerland), Jim and Shelley run Mary's House, a Catholic Worker House and our featured non-profit, and Jim is a theologian and writer. Only when I asked Jim whether he writes as a hobby or is published, did he mention that "a few of his books have been published."

It was Teri, a grandmother who'd brought her nine-year-old granddaughter Olivia along, who informed me that Jim is a famous writer who wrote a popular book about JFK.

(We're getting closer to the Gandhi part, I promise!)

Turns out that almost-80-year-old James W. Douglass is the author of JFK and the Unspeakable: Why He Died and Why It Matters (2008). The book analyzes the presidency of John F. Kennedy as well as the events surrounding the assassination of John F. Kennedy. The book is drawn from many sources, including the Warren Report. The book's central thesis is that Kennedy was a cold warrior who turned to peace-making, and that as a result he was killed by his own security apparatus.

Sales shot up when Oliver Stone recommended the book, and the book has been referenced in Rolling Stone and on Real Time with Bill Maher. You can find out more about the book on Wikipedia.

(Upon further research for this blog post, I discovered that Jim and Shelley received the Pacem in Terris Peace and Freedom Award in 1997, which has also been awarded to JFK, Rev. Martin Luther King Jr., Mother Theresa, Archbishop Desmond Tutu, and Thích Nhất Hạnh, among others.)

Are you ready for the Gandhi part? Essentially, Jim and Shelley's lives have been devoted to nonviolence, based on the teachings of Gandhi. Jim is also the author of Gandhi and the Unspeakable: His Final Experiment with Truth (2012).

As I stood between Jim and Shelley for that hour on the corner, and joined the group at the Chinese restaurant, New China Town, where they have dinner after the vigil every Saturday, I was the lucky recipient of Jim and Shelley's open hearts and minds, zippy wit, and decades of commitment to peace and love. Within that hour, I was also invited to stay at Mary's House or with Teri, to a contradance, and the Pride parade.

I enthusiastically changed my plans to stay overnight in Hattiesburg, MS, joined the group for dinner, went to the Pride parade with Teri and Olivia, and spent the night in Teri's guest room. By the way, this was the only night on the trip so far that I didn't have my lodging lined up. (A plug for leaving some things to fate!)

For more photos and videos from the Pride parade, have a look at the Facebook posts!

To be clear, I'm not Catholic, I respect and appreciate those who serve in the military, and there's a good chance that if I was distracted by the churn of day to day life, I'd have to stopped at "grey-haired hippies" and moved on.

And I'd have sadly missed this amazing experience and chance to learn and these lovely, interesting people who are outside my usual sphere, and who didn't shake me down on my beliefs or affiliations before they invited me in to their vigil, their parade, or their homes.

And that's some serious Sparking Good action going down in Birmingham, people! Yay.

Want to double down with us on our commitment to being curious, open, and learning over being rigid, closed, and right??

As always, if so inspired, please contribute to Mary's House and/or spread the word about Sparking Good! 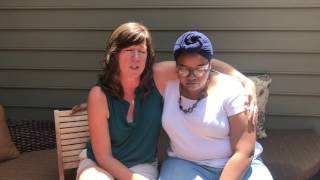 Youth Aging Out of Foster Care

press to zoom
My Stops!